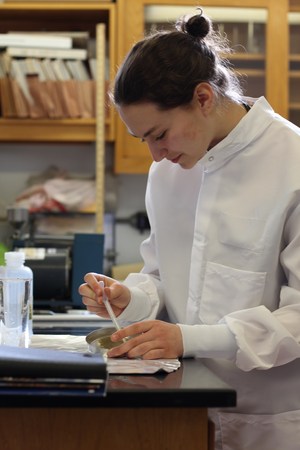 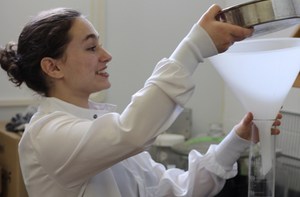 Meet Athena - she holds interests in both biology and marine biology and has a profound love for the environment.

With an eye that recognizes the beauty of the earth and a passion to preserve its features, the Met’s Athena Vieira serves as a model of an individual who has worked to give back to others and make an impact on the world. Athena holds interests in both biology and marine biology, with this East Bay Met student possessing a profound love for the environment. The Met’s unique approach towards education intrigued Athena into enrolling. Its non-traditional framework provided Athena with the opportunity to explore her interests and translate her kinesthetic learning style into action. Over the course of her time at the Met, Athena has exhibited determination and commitment, with her love and passion for the environment conveyed through her project work.

Athena’s influence has made an impact on many. The previous year, Athena worked to establish a community garden at Newport’s Florence Gray Center. Athena received widespread support. This East Bay Met student also collaborated with her fellow peers at the Met in restoring garden boxes and cultivating fruits and vegetables. East Bay Met students also assisted Athena by nurturing the gardens over the course of the summer months. Through this project, Athena sought to educate others, and by enacting this work, Athena also aided in uniting the Met’s East Bay community.

The Met has enabled Athena to consider potential careers and plans to pursue in the future. Athena has held a number of internships, each contributing to her experiences and furthering her knowledge in her fields of interest. This dedicated student presently interns at two sites: the Environmental Protection Agency and West Place Animal Sanctuary. Athena’s current project with the Environmental Protection Agency has allowed her to collaborate with scientists from the organization in repairing eroded salt marshes in Martha’s Vineyard. The East Bay Met student’s present project at West Place Animal Sanctuary involves caring for neglected animals, as well as communicating awareness to others about West Place Animal Sanctuary through the construction of a guide. Athena’s project work touches upon a series of learning goals.

This future member of the Met’s Class of 2019 has worked to explore her interests, and in doing so, Athena has made a significant impact on others and in her learning. Athena interns with a multitude of mentors who have provided her with enriching learning experiences. This student has also completed two Salve Regina courses thus far during her time at the Met. Athena maintains an interest in photography as well, with focus on the depiction of nature or wildlife. In addition, this East Bay Met student plans to implement macro photography and holds an interest in music.

Athena has also appeared in recent headlines with regard to her efforts. The previous year, a writing contest entitled Writing your Way to Hamilton: Big Ideas for a Changing World was offered to secondary students in the state. Athena entered her essay into the Newport Historical Society’s contest, and was revealed as a contest winner. As of recently, an event was held at the Rhode Island State House in honor of the award recipients. Athena joined her fellow contest winners at the function. The contest involved reflection upon the history of the state, with focus on change and influence within communities. As a reward for their achievements in writing and for the ideas expressed, the ten students have been granted the opportunity to witness Hamilton, An American Musical. The premise of Hamilton, An American Musical is comparable with the intent of the contest, as each conveys the ability to make a difference.

The Met congratulates Athena on her award. Athena is one who has sought to make a difference, and both Athena’s writing and community efforts have demonstrated the positive difference that this student has made. At such a young age, Athena has accomplished much. Athena Vieira has made a mark, as she has positively contributed to the environment and united communities through all that she has accomplished.